For the final day of our trip, we headed back to Ulaanbaatar to soak in some of the sights, chill out a bit, and tackle the car rental return process.

After checking into our hotel and cleaning out the car, we headed off to Sixt to return the car. Again, there were mega inspections including another trip to the mechanic for a once over. Finally we got the car settled up and headed back toward Chinggis Khan Square which seemed to be the epicenter of the touristy neighborhood. Before visiting the sights, we grabbed a bite to eat at a Korean restaurant, because everyone eats Korean food in Mongolia, right?

As we set out from the Korean joint, we realized that we had a problem. Kai’s Bob stroller had a flat tire. Unbelievable. Bob has been all over the world and has logged literally thousands of miles running with no issues. I guess that was par for the course. We limped Bob back to our hotel, dreading pushing him through both the Beijing and Dubai airports the next day and dreading even more the idea of checking him and having an energetic toddler on autopilot through two airports.

We decided to ask the hotel concierge if he could help us get it fixed. Two hours and five dollars later and we were back in business! Another example of fantastic customer service in Mongolia! Again and again I was amazed by the level of service in Mongolia, sure there were challenges like with the rental car company, but on the whole, Mongolia was a great place to visit.

After bumming around Ulaanbaatar for the rest of the day, we got prepared for a long journey back to Dubai in the morning. All in all it was a successful trip and Chris and I both agreed that it was our favorite in a long time. We got to see a beautiful landscape, tons of animals, and feel a sense of adventure as we navigated this country with almost no paved roads. I think it will be hard for us to top our trip to Mongolia!

The next leg of our journey took us back to Ulaanbaatar for a night where we regrouped, recharged, and did some shopping for souvenirs. Cashmere is the thing to bring home from Mongolia and Chris found a great cashmere hat for himself. Ultimately I decided that even the finest and most trendy cashmere shops in Ulaanbaatar did not have a sweater that I like better than the ones that I already own; I guess that’s a good problem to have.

After spending some time in Ulaanbaatar, we headed back out of town to spend the night in another yurt. This one was the king of all yurts with a huge living area, a marble bathroom complete with hot and cold running water, a small kitchen area, and, most important of all, heat!

It is hard to imagine that this wide open view from our yurt is just an hour drive from downtown Ulaanbaatar. Even though the capital city is home to about half of Mongolia’s population, it still has fewer than 1.5 million residents. The terrain of Mongolia varied vastly from the tree covered hills northeast of Ulaanbaatar to the Gobi in the south, and finally the hilly and treeless steppe to the west of Ulaanbaatar.

We did a bit of hiking out near out yurt, as much hiking as an almost three year old can do anyway, and spent the rest of the day just enjoying the middle of nowhere.

Amazingly, the HS Khaan Resort may have had the highest service level of any hotel that I have ever stayed at. The staff easily outnumbered the guests and we had all of our meals prepared by a French-trained Japanese chef; he did such a fantastic job that we even ordered an extra entree as dessert! For any aspiring Mongolia tourists, this place is definitely a must stay.

We set out early yesterday morning from Terelj, headed about 650 kilometers south to Three Camel Lodge, which is a bit northwest of Dalanzagad in the Gobi Desert. After about 90 minutes of driving, we stopped in the first of three towns that we expected to see along the way to get some bread, water, and a few snacks. Yes, that’s right, just three towns in more than 400 miles. No joke. And they were tiny towns with just the basic necessities. It reminded me a bit of Alaska or the Australian outback.

The first two hours of our journey were on dirt roads, constantly checking the GPS to make sure we were on course. With Chris as the driver, me as the navigator, and Kai with the ultimate powers from the backseat, we were lucky to easily find the paved road that we were seeking for the middle few hours of our drive, finally finishing off the last two hours on a dirt road from Dalanzagad to Three Camel Lodge. 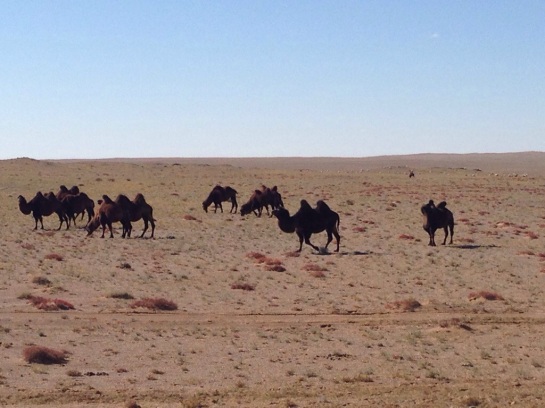 Along the way we saw many animals; horses, cows, and more two hump wumps than Kai could count. We saw a golden eagle, pikas, marmots, ermines, and even a fox, but strikingly few people. Deep into the Gobi, Chris slammed on the brakes “Brit get the camera! I hope the zoom lens is on! Wild cat up ahead!” We are still debating if it was a lynx kitten or a baby snow leopard. Thankfully, this furry feline was tame!

After a full day of driving, covering hundreds of miles, I have concluded that Mongolia is indeed vast and it is most certainly empty. We knew that it was the least densely populated country in the world, but that doesn’t hold much meaning until you visit several province capital cities that are smaller than Dawson City, Yukon. It is pretty remarkable.

The Gobi Desert is much different than our desert in Dubai. We are accustomed to Lawrence of Arabia style sand dunes and suffocating humidity, but this is a flat, dry desert covered in low grass and brush with some occasional tumbleweed blowing by. 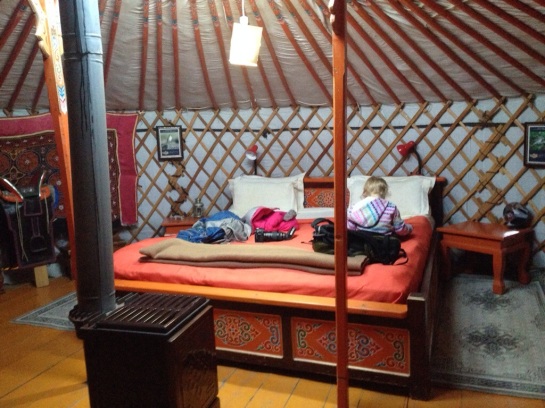 We spent last night in a yurt in the Gobi, which was a pretty remarkable experience. The temperature dipped quite low after the sun set, but the yurt had excellent insulation and a wood stove to keep us warm. Our yurt had the special distinction of being a double yurt with a bathroom and flushing toilet in the smaller side.

After a night in the Gobi, we are excited to see the Flaming Cliffs tomorrow, and maybe some petroglyphs and dinosaur eggs too!

Our second day in Mongolia began with a trip to the local tire repair shop. In reality, I think it was the local fix everything shop; there was also a boat under repair. It really wasn’t much of a shop at all, it was a concrete building with rustic looking wooden doors, a few yurts in the yard for the proprietor and his family to live in, and a junk yard dog thrown in for good measure.

When the tire was fixed, we headed back to our hotel to put it on the car. Kai supervised. 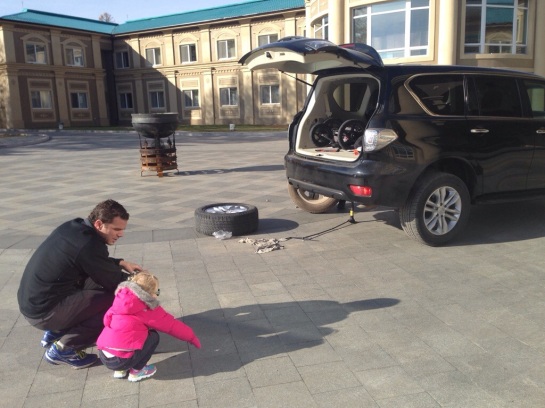 Nervous about a less than awesome tire patch, we headed out on a day of adventures to test it out before our long drive to Dalanzagad and Three Camels Lodge tomorrow. In the morning we visited Turtle Rock and a meditation temple before deciding to ditch the touristy stuff and explore some more remote areas.

Shortly after heading off-road, Kai did her requisite road trip puke in the car. Chris cleaned the Kai while I cleaned the car. And we both prayed that she had nothing left in her tummy to throw up again.

We drove for several hours through nothingness. Over hills, through valleys, past yaks, cows, horses, and yurts. At one point today we even saw a two hump wump, um, camel. After nearly three hours of driving we had almost completed a semi-circle drive from one main road to another, when our path ended.

Disappointed, and having exhausted all other alternatives, we turned around to drive back the way we came hoping that we would make it before sunset. Just before dark, we pulled into our hotel only to have the day finished off with projectile vomiting all over the lobby of the hotel. Kai seems to be more prone to motion sickness than most people, I am better than most at puke cleanup.

A few weeks ago Chris and I were inspired to buy plane tickets to Mongolia for the upcoming Eid holiday. Before doing much research, we took the plunge and bought the tickets deciding that we would figure out the details later. Our initial searches on the Internet told us that Mongolia might be a difficult country to travel in, but we were undeterred and forged ahead with our plans.

Fast forward to a few days ago when we hopped on a plane bound for Beijing, still with very few plans for Mongolia, still hoping that we would figure it all out when we arrived. Yesterday we visited the Great Wall of China and then caught an early morning flight to Ulaanbaatar. Less than a day into our trip to Mongolia, I can already tell that this is going to be an adventure.

My initial impression of Mongolia is that it is only for the most laid back fly by the seat of their pants travelers. After an ordeal lasting more than three hours we finally got our rental car. It involved Chris heavily editing an absurd car rental contract, a trip to the local mechanic to have the under side of the car inspected, and Chris walking out of the car rental office once with the intention of abandoning that plan. If there had been more than one car rental car company, then we probably wouldn’t have complied with all that nonsense, but Google wasn’t turning up any other legitimate options.

Finally we headed out of town in a big Nissan SUV making a pit stop at a grocery store along the way. Surprisingly, the random grocery store that we found was far better than most in Dubai!

After stocking up on bread, peanut butter, fruit, water, and UHT milk, we left Ulaanbaatar for Terelj where we will spend out first two nights. Within ten kilometers of the capital city, things began to change. 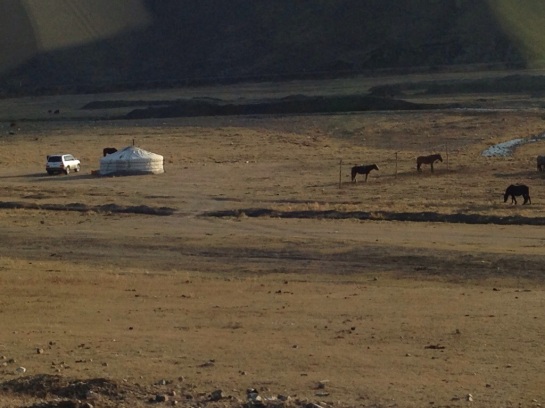 And we even saw our first two humped camel! 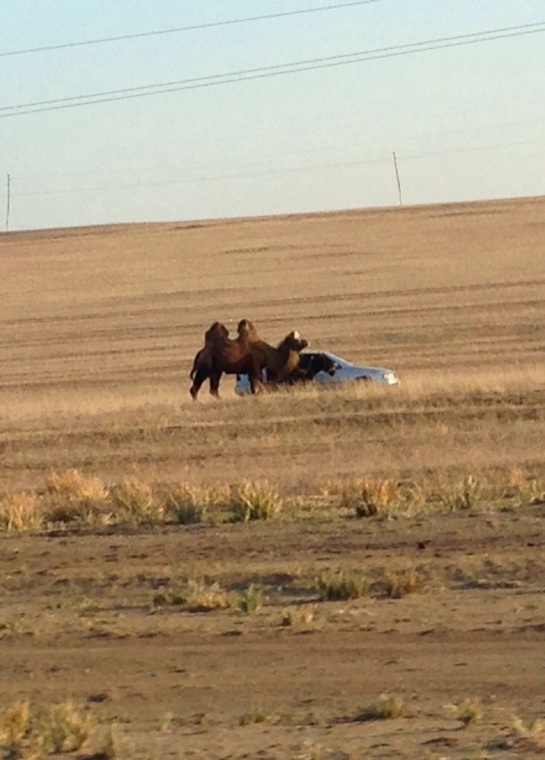 The going was slow, in part due to erratic traffic patterns and in part due to the quality of the road, but we made it to our hotel without even getting lost

…only to realize that there was air GUSHING out of one of our back tires! 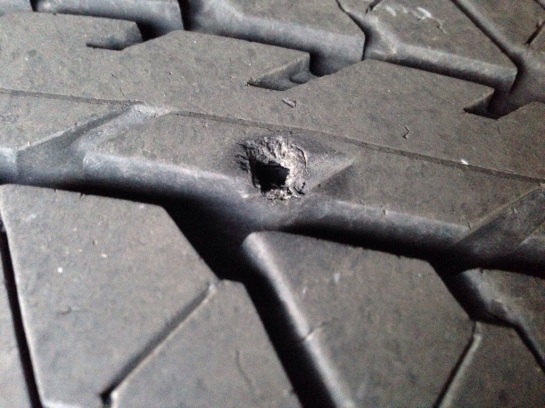 The adventure has begun!