After leaving Porto, we began to make our way down the Portuguese coast visiting a few beach towns along the way. Chris was hoping for a chance to surf, but it never worked out. It was pretty cold out and, with no wetsuit, I don’t know how enjoyable it would have been anyway.

One of the towns on our “must see” list was Nazare. Up until fairly recently, it was a very traditional, somewhat untouched, fishing village and I was really curious to see it. Unfortunately, when we got there it looked more like a typical American boardwalk than a Portuguese fishing village. Lining the beach was store after store selling the same generic trinkets. Nearly gone were the old women in plaid skirts, knee socks, and fisherman’s sweaters that I had heard about. It is hard to say if people like me are the problem, “invading” the village to visit the ocean or if tourism is a huge benefit to the local economy. I’m guessing the latter. While the curiosity of seeing a traditional village is gone, I sensed that tourism was important to the locals.

We did not spend much time in Nazare because we were pretty crunched for time by that point in the trip and we had committed to a hotel room in Lisbon that evening.

The next morning, we got started bright and early exploring Lisbon and Chris was feeling super enthusiastic, practically dancing in the streets.

One of the things that I was especially drawn to in Lisbon were the mosaic sidewalks. Most of the city was destroyed by fires that started as a result of the Great Earthquake of 1755 and, when the city was rebuilt, this type of sidewalk was installed with beautiful and intricate patterns. I can’t even imagine the work that must go into making one of these! 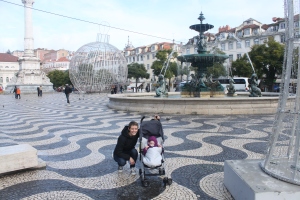 Our first stop in Lisbon was the Tagus River waterfront. It was sunny and warm there with a great musician playing for tips. We might have stayed there for hours had Kai not gotten impatient for us to keep going. By this point in the trip, I think she was starting to get a bit tired of riding around in the stroller so much. I don’t blame her, in fact, I was delighted that she tolerated it for this long.

Next stop was to see the “World’s Sexiest Bathroom” before we continued our journey through the winding streets of Lisbon. Obviously I needed to see why it was so great. I paid my 50 Euro cents and went in. It was nice and clean and had some pretty cool wood paneling on the walls, but I don’t know that it was deserving of such a bold title. 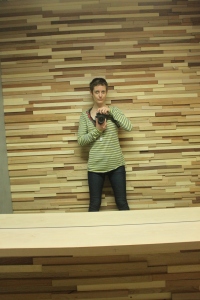 After climbing many hills and carrying the stroller up more staircases than I can count, we arrived at the top of the city. A whole neighborhood full of breathtaking views and plenty of cafes to enjoy them from.

We tooled around there for a bit and grabbed some lunch before heading back down the hill and over to the Belém neighborhood to taste pastries from the most famous pastry shop in Lisbon. In many ways, it reminded me of going to Cafe du Monde in New Orleans for beignets. The Pasteis de Belém is a pastry shop that was opened by a group of monks who needed to fund their monastery. The shop has been in business since 1837; it sounds like this gig is working out for them.

Next up was the Jeronimos Monastery, home of the famous pastry making monks. Of all the monasteries that we visited on our trip, I think this one was my favorite. I did like the frescoes that we saw in Madrid, but I had much more appreciation for the architecture at Jeronimos.

After hitting a few more sights, it was clear that Kai was finished and, quite honestly, I think we were too. We took a cab back to Baixa for dinner, but first there was the matter of getting Kai to sleep so we could eat in peace. I had high hopes that she would easily fall asleep after riding a few bumpy blocks on the mosaic sidewalks, but no such luck. We had to employ more advanced techniques. A pashmina from a street vendor and an ultra pasteurized “milk box” later, she was zonked out, I was eating more grilled fish, and Chris was eating yet another “tipico” meal of octopus over rice.