As I alluded to in my last post, Chris, Kai, and I took a little trip at the end of December. We set off to Spain with a very loose itinerary in mind and filled in the gaps with our standard “winging it” mode of travel.

Our trip started off with a bit more excitement than we hoped for as I checked the flight status on our way to the airport. Our flight from Indy to Newark was delayed and it was almost guaranteed that we would miss our connection to Barcelona. Within seconds we had called up the United 1K line asking about our options. They were able to get us onto another flight to Newark, which, fortunately, was also delayed. It is ironic how a delay that probably caused problems for many people’s travel schedules was just what was needed to save our trip.

A few hours later we rolled up to the gate of our Barcelona-bound flight just in time for the boarding announcement. Perfect timing. 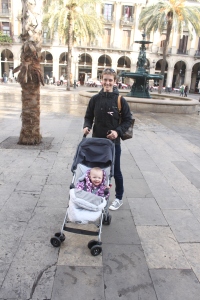 Within minutes after take-off, Kai was comfortably asleep on the floor under Chris’ legs. It was quite possibly her most awesome flight ever. We flew overnight, and when the breakfast cart came around and I asked for a carton of milk for the baby on the floor, the flight attendant looked stunned. “You have a baby?” Kai had slept nearly the whole way from Newark to Barcelona.

Upon landing, we quickly made it out of the airport, through the rental car line, and off into the city to begin sight seeing. In Barcelona, we saw sights such as the Gothic Quarter, La Sagrada Familia, and Las Ramblas, but my very favorite thing was La Boqueria market which was situated ajacent to Las Ramblas. I am a sucker for markets, especially food markets, and this was among my favorites of all time. It was alive with the sound of merchants and their customers completing their transactions, full of brightly colored fruit, sickeningly anatomical meat stalls, and a new aroma around each corner. 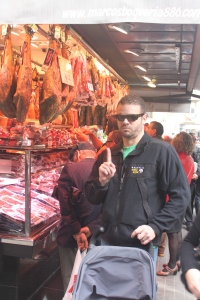 Our hotel in Barcelona was actually a two bedroom apartment. When I booked it, I thought that we would want two rooms, plus a living space so that we would have enough room to get over our jeg lag without disturbing each other. Naturally, Kai had other plans. Her jet lag did not even approximate a US or a Spanish schedule. Early on the morning that we planned to drive to Madrid, Kai woke up just after midnight, ready to go for the day. Chris headed out into the street to get us a midnight snack at a Turkish food stall outside of our hotel while I tried to get Kai back to sleep. By the time Chris came back, I was quite sure that Kai would be awake for the remainder of the morning and suggested that we make the most of it and go have breakfast in Andorra.

A side trip to Andorra would add about three hours to our drive to Madrid, but when else would we have the opportunity to go? Plus, having a midnight wakeup call is almost equivalent to gaining an extra six hours of “day”, right? Before I knew it, we were cramming suitcases back into our tiny A3 hatchback and making our best effort to head northwest out of the city.

Within hours, we were winding through the Pyrenees to the Andorra border crossing, which, as far as I can tell, is entrusted to the EU Border Control in France and Spain. The border guard did not so much as slide his window open before waving us through to Andorra. Since it was still pretty early, we elected to drive completely through the tiny municipality and on into France before turning around, proceeding through another uninterested border crossing, and backtracking to Andorra la Vella for breakfast. After a “tipico” breakfast, our standard order when we can’t speak the local language, we needed to jam to Madrid to catch a flight to Morocco.

As we wound our way towards the border, we heard a wretching noise coming from the back seat. When we pulled over to see what was going on, Kai was covered in milk and yogurt vomit, which looked essentially like she dumped a huge tub of yogurt all over herself, her car seat, and the whole backseat and smelled like it was curdled, months old yogurt that might have been aging in my college-era refrigerator. I was not convinced that our 90-pack of baby wipes would be nearly enough to tackle this mess, but, without another choice, Chris got to work stripping and cleaning Kai while I began scooping giant handfuls of vomit onto the side of the road.

In a bold maneuver, we decided not to dress Kai again until we got to the airport. We did not have a ton of extra changes of clothes for her and we were not sure if the wretching would continue. After strapping her back into the car seat naked and cranking up the heat, we were once again enroute to the Andorra/Spain border. This time, the border agents did care about the crossing, but their interest quickly waned after we opened the hatch back for them to poke around and they got a whiff of our car; they quickly sent us on our way again.

Minutes later, the wretching resumed. Once more, everything was covered in a foul yogurt-esque slime. This time we were patting ourselves on the back for the genius decision not to get Kai dressed again. Finally, we were on the road to Madrid again.

Next up: A trip to Marrakech