The last month has been a crazy learning experience for me and Chris. I think it is safe to say that things will never be the same again.

Our first few days at home with Kai were fairly chaotic and emotionally charged for me. To compound the typical crazy that comes with bringing a baby home for the first time, we were totally unprepared for her arrival. In between springing into action at her every whimper and repeatedly going through the 5S baby troubleshooting checklist, we cleaned out the room destined to be a nursery and within 48 hours had a fully functioning nursery assembled.

After a few days, we finally started to become a bit more relaxed, not letting her cries stress us out so much. I think this was key to improving our baby troubleshooting. It was also important for us to be cognizant of the fact that just because she had her diaper changed or ate fifteen minutes ago those problem were not automatically scratched off of the checklist. Becoming more flexible about that has recently allowed us to sleep in our bed rather than taking turns in the floor of her room. At this point, I would say that we are coping well.

Kai has grown a lot since she came home. She was born weighing 6 lbs 6 oz, was discharged from the hospital weighing less than 6 lbs, was up to 6 lbs 9 oz at her last doctor’s appointment two weeks ago, and is significantly larger than that now.

(Although still not too big!)

Her weight was kind of a big deal when we first left the hospital, we were threatened with having her readmitted if she did not gain weight between being discharged and her first doctor’s appointment four days later. I was extremely nervous about this because at first she had trouble staying awake to eat, so I was not sure that she was getting enough food. This led me to decide that it was best for me to pump milk that we bottle feed her, which is still primarily how she eats. It is pretty inconvenient for me, but making that decision early on seemed like the only responsible thing to do.

As for me, I was very fortunate that Kai’s birth was not an especially traumatic experience relative to how it could have been. I was up walking around that same day and felt good enough the day after we came home to engage in activities like scrubbing the inside of my refrigerator and helping Chris move our sofa.

It took a few days for me to look relatively normal again and maybe a total of two weeks for me to declare my stomach undamaged from pregnancy. When I found out that I was pregnant, a super vain part of me was über concerned that my stomach, which I typically put a lot of effort into keeping reasonably flat, would be destroyed forever. 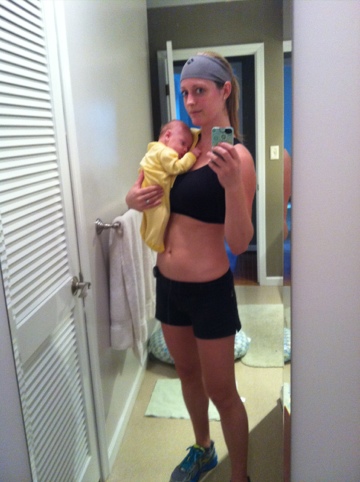 About two and a half weeks after Kai was born, I felt healed enough to start running again, my first run back was pretty rough though. It was a struggle, but I made it two miles at 10:00/mile, walking for a total of two minutes. In retrospect, I think that first run was worse than it needed to be because I ate my weight in fondant minutes before I hopped on the treadmill, no wonder my stomach was cramping.

Since then, my runs have felt much better. I have begun to incorporate some speed work and hills hoping to get back to where I was pace wise at this time last year. I will also make a point to run with other people more often, in fact, I would have gotten started on that today if it were not for an ice storm last night.

All in all, I feel like Kai is doing great, Chris and I are getting much more proficient at baby care, and I feel back to normal again, lack of sleep notwithstanding. Things are going much better than I could have imagined and so far it has even been kind of fun. [Ok, in the daytime anyway.]