Yesterday marked the beginning of Diwali, the festival of lights!

It is one of the most important Hindu festivals and reminds me of Christmas in many ways. One of the original Diwali traditions was to light many tiny oil lamps, which is where the word Diwali comes from. Today, we can certainly see many oil lamps, but, more frequently, we have been seeing many strands of tiny lights, which I would tend to refer to as Christmas lights.

The light display that I am standing by below happens to be oil lamps, but I think that you can still imagine how they would conjure images of Christmas for me. In addition to displays like this one, there are lights strung all over many homes, buildings, streets, and almost anywhere one can imagine. 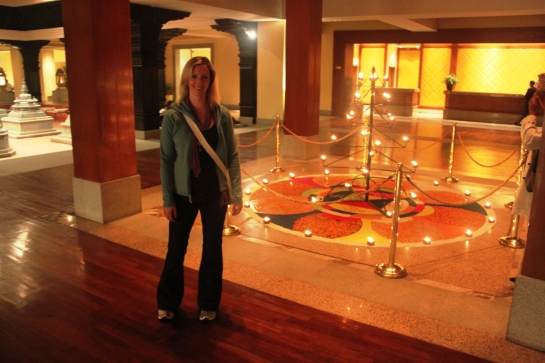 This light phenomenon extends to fireworks as well, which are certainly not in short supply. As early as Tuesday night, Diwali celebrations were well underway and it was almost impossible for me to conduct phone calls from my apartment because of the volume and frequency of the explosions.

When Chris arrived home, late Tuesday night, I should not have been surprised that he was armed with fireworks of his own. I think he had  pretty good time buying them because in addition to being  significantly less expensive than at home, the selection was far superior. India seems to be a big proponent of Darwinism. Fireworks are no exception to that policy.

I didn’t get to see Chris’ pyrotechnic display, he set them off with Sentil, our driver, but his recap of the event made it sound quite spectacular. Something to the effect of “Brit, you know when you go to a fireworks show? Like big fireworks? Yeah, that’s what I bought.”

Fortunately, Sentil is always looking out for Chris and, other than a minor burn, Chris returned unharmed.

Another parallel that my mind draws between Christmas and Diwali is that it seems to be a big shopping season. All of the stores have Diwali sales and specials and, right in line with Christmas, there is a tradition of exchanging sweets and gifts for Diwali. Chris brought me a box of sweets, but I didn’t end up eating any. We both agreed that I would be happier to share them with our driver and the building security guard.

My other Diwali gift was a beautiful sari. You can see it folded up in its box in the lower left corner of the picture above. It is two toned, so from one angle you see the color shown and from the other angle it is a light green. Pretty cool stuff. I haven’t had a chance to try it on, or, let’s be realistic, figure out how to put it on, but I will be sure to post some pictures when I do. I will need to get the shirt that goes underneath it tailored first, which may or may not be possible given that I am pregnant right now.

I didn’t go shopping for Diwali, as I did not realize that we were celebrating, so Chris took the liberty to select his own Diwali gift, a traditional Indian mens’s outfit consisting of a dhoti and a Mandarin collared shirt. It makes perfect sense that Chris would like a dhoti, because it has a very similar wrap around style to his ie lavalavas. I will also be sure to post pictures of Chris in his new clothes when he gets around to trying them on.

I am so thankful that we have had the chance to witness so many Hindu holidays because while I can draw some parallels between Diwali and Christmas, many of the traditions are so far different from anything I have ever experienced, like Ganesh Chaturthi for example, that there is no way that I could ever understand without actually seeing them.