I keep alluding to a post about pickpockets, but that may be too limited a scope for this post. I tend to travel to places where my family, and sometimes my friends, worry about my safety. When I saw this sign on a train platform in Kuala Lumpur, I started thinking, in a more practical sense, about their concerns. 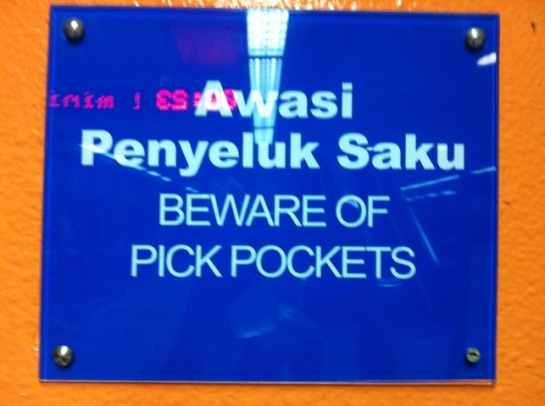 I thought back to when we headed to Nairobi last fall. People were worried about terrorist strikes, kidnappings, and all sorts of horrifying crimes. Of course these things can happen, but they can happen anywhere. As a native to the New York Metro Area, my family travels to New York City, the victim of quite possibly the largest terrorist attack ever carried out, on civilians no less, without thinking twice. For some reason though, bring up Nairobi and people’s minds immediately jump to the 1998 U.S. Embassy bombing, an attack on a government target.

So what is the point of all this rambling?

Where I am going with this is that I think we can hype up the unknown to be far more scary and dangerous than that which with we are familiar. Most travellers do not fall victim to these outrageous crimes, but instead fall victim to more simple crimes such as getting ripped off when they can’t count their “funny money” correctly or, as the sign above mentions, pickpocketing.

I have been very fortunate to only have one close call with pickpocketing. Several years ago I found myself tackling a little girl, probably six or seven years old, in the Beijing subway when I realized that she was now holding the purse that had been slung across my body. Luckily, the purse landed back in my hands moments later,  the strap in two pieces. It still makes me feel really strange to think about jumping on this child that was probably one third my size, but it needed to happen.

Clearly small crimes like pickpocketing can, and do, happen. They are often most prevalent surrounding the hottest tourist destinations in a city, but I maintain that this is no reason not to get out and see things. Well, not if you’re ok with tackling first-graders that is.