Sunday morning in Kuala Lumpur began with a mad rush to the Petronas Towers to try and get tickets to the top. We stood in line for what seemed like an eternity before finally being told that we were too late, sadly, only by a handful of people.

Perhaps we would have made it early enough if we had not taken so long in 7-11 picking snacks to eat while we waited in line. Although the Kit-Kat I chose did taste pretty good for breakfast. Maybe if we had made the short walk to the towers instead of taking the train? Who knows? 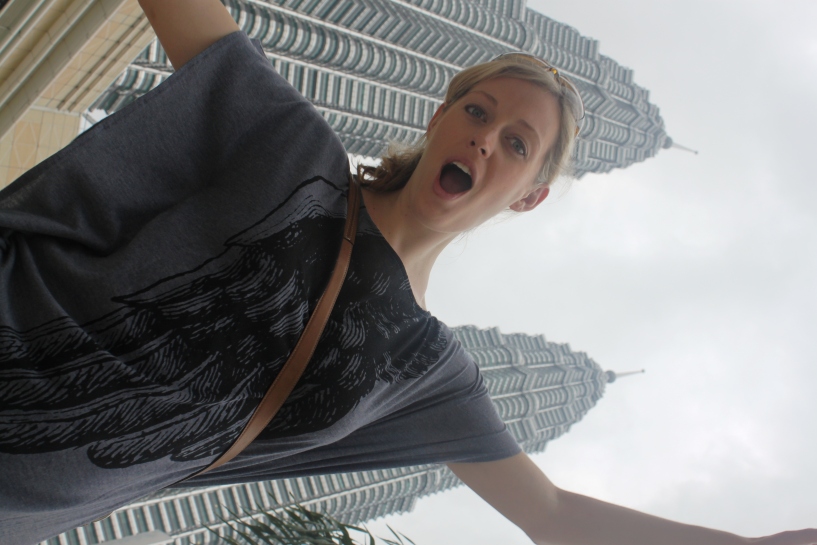 It turns out that it didn’t matter. There were more ticket scalpers there than at a college football game. Not only did we get tickets, but we got to pick what time we went up, did not have to wait all day to get what would have been nearly the last tickets handed out, and only paid a few dollars more than face value. I hate ticket scalpers, but I have to say that this was a win.

We made it up to the sky bridge and back before lunch and were able to move on to other exciting things!

Wait, there are things in KL that are more exciting than the skybridge of the Petronas Towers? You bet. Just ask Chris.

Next up, we headed to the mall at the base of the towers to buy a few items that are simply not available in India. After looking at several surf related stores, Chris finally decided that Rip Curl was the place. It was just a matter of if he was going to get one surfboard or two.

Chris tried to convince me that the big board was for me and the smaller one for him, but my stomach-laying days are numbered at this point, so I wasn’t sold. He mentioned that our friend Rob was coming

this weekend and that Rob might want to go surfing. And finally, he admitted that he just wanted two surfboards because the bigger one was more practical for our local wave, but the smaller one “looked really fun”.

Does this part look fun to you?

After what seemed like an eternity looking at surfboards, we began the even longer trip back to our hotel with his new toy. In actuality, the journey back wasn’t so long for me. I wasn’t the one carrying the surfboard through a mall, into a train station, on the train, out of the next train station, through another mall, and finally into our hotel.

Not to worry, my long, surfboard laden journey was still to come.

Chris’ stay in KL was coming to an end, but my flight was not scheduled to depart until nearly nine hours after his. Lucky for him, he was flying superbudgetair who was going to charge an arm and a leg for checking his new toy. Heck, they charged him for water on his flight over to Malaysia. That meant that I, with my business class ticket and free checked bags, had the pleasure of hauling the surfboard back to India.

Chris, if you’re reading, this is true love. I carried a surfboard, old school style, on my head through two airports for you. I would have gone for the less dramatic under arm carry, but my arm wouldn’t reach around the box. It was a sight to behold.

Literally every single person in both airports who saw me had a comment or some helpful words of wisdom. With my blonde hair, I tend to stick out enough, top me with a surfboard and I’m a full-on freak show. I’m sure that there are plenty of pictures of this spectacle, unfortunately, I am not the proud owner of any of them.

Somehow, the board arrived safely in India, unscathed by the typically destructive baggage handling. Surprisingly, I even made it through customs with it without many questions. Hopefully Chris will have fun testing it out on Saturday!

In my last post, I promised a blurb on pickpockets. No, we didn’t get pickpocketed, but I still have pickpocket commentary in the making. Maybe next time.