Friday night we headed south from Chennai for a quick trip to Pondicherry and Mahabalipuram. We had been hearing quite a bit about Pondicherry, even before we left for India, so it quickly became a must see on our list.

Pondicherry was a French Colony on the southern coast of India and part of the allure of Pondy is the Provençal inspired architecture and Franco-Tamil Creole cuisine. The real allure, to the young party animals anyway, may be that Pondy has far lower taxes on alcohol than any other city in the state of Tamil Nadu.

As for sights to see, our favorite was Bharathi Park, a huge, perfectly manicured park in the center of the French side of the city. Aside from the French street names, there were very few remnants of French influence in the former colony. 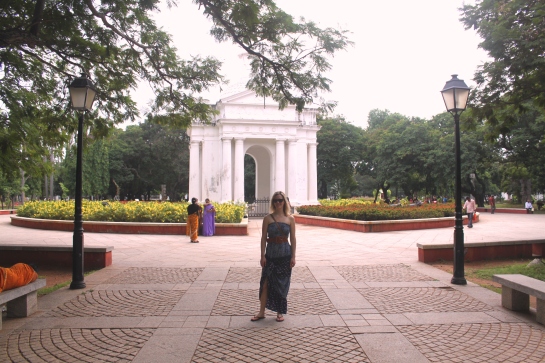 Perhaps my expectations were far too high after dozens of recommendations to visit Pondy, but it didn’t quite live up to what I imagined. I envisioned something like the Indian version of the French Quarter of New Orleans, on that grand a scale, and kicked up a notch by its beach front locale. Instead, what I witnessed was a few yellow townhouses on a handful of broad tree-lined avenues, um, rues.

French culinary inspiration seemed to be limited to the addition of Filet Mignon to every menu. As a non-beef eater, this didn’t impress me all that much. I will add though, that I ate one of the best pasta dishes in recent memory while in Pondy. I would say that they have Italian food all figured out!

After leaving Pondy, we headed north to Mahabalipuram, a less acclaimed town that we absolutely adored. Mahabalipuram is known for its hundreds, dare I say thousands, of ancient ornate sandstone carvings. I was absolutely blown away when I considered the time and effort put into carving these enormous structures.

Our first stop in Mahabalipuram was Pancha Rathas, a series of five monolithic structures, similar to this one, carved in the 7th century.

My favorite carving was a bas-relief called Descent of the Ganges, in particular I liked this heard of adult and baby elephants. I think they resonated with me because they reminded me of the adorable baby elephants that we saw in Africa. 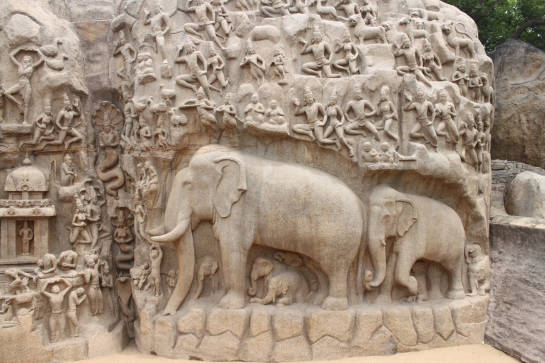 As we ambled through acre upon acre of ancient stone carvings, I couldn’t help but be amused by the huge number of animals that seemed to 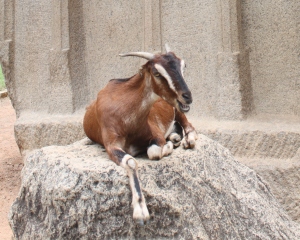 be living among them. I came to India fully expecting to see cows in the street, but it didn’t occur to me that I would also see goats chilling out on ancient artwork in a UNESCO World Heritage Site.

This guy looks totally comfortable with mugging for the camera. He was happy to work it for the camera and struck several saucy poses during his photo shoot with us. “Bahhh, this is nothing dah-ling, bahhh, I am the star of this show all day long!”

Finally, we did what had been on Chris’ mind since leaving Chennai, we scoped out a potential surf spot. Um, sweet picture of me below. I believe that what he was really trying to capture was not my elbow, but that “fun little right point break” [insert correct surfer lingo here]. 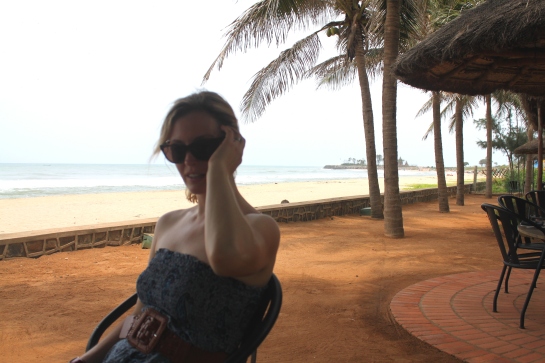 What you can really garner from this photograph is that we will be spending a lot more time in Mahabalipuram, just one hour south of Chennai, and that Chris is über bummed that he left his surfboard in LA. Fortunately, they rent surfboards here. Unfortunately, as I can understand after using a few lame rental snowboards here and there, rental boards stink.