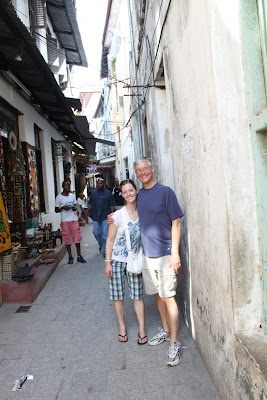 After a few weeks out in the wild, we headed to Zanzibar for a week of civilization. We divided our time between Stonetown and a northern beach town called Nungwi.

Strolling the streets of Stonetown was very interesting because the city was full of ancient buildings with architectural inspirations from around the world. We spent some time walking around the city before tucking into an oceanside café where we watched some ferries get loaded.

Ferry loading was quite a production as the ferry pulled up to very deep, soft sand and many of the cars being loaded did not have four-wheel drive. I was surprised how many large items were being hand carried by passengers across the channel to Dar es Salaam. I could have watched this ordeal day after day.

After Stonetown, we headed to the north tip of the island to the town of Nungwi for some sport fishing, snorkeling, and general relaxation.

Ok, let’s be realistic, there wasn’t much relaxation. Chris and I are both just a little too energetic to actually relax.

Our sport fishing trip didn’t exactly go as planned. For months, Chris had dreamed of catching a marlin or dorado in Zanzibar. For months, I patiently listened to him recounting big fish tales from his trips to Baja. For hours, I patiently sweltered in the tropical heat as we trolled the Pemba Channel catching nothing. Essentially, we ended up with a very expensive and uncomfortable boat ride.

After that experience, our wallets were feeling light and our excitement about Zanzibar marine life was somewhat deflated, so we decided to do self-guided snorkeling rather than hiring a boat for a real snorkeling trip. Twice a day we had watched throngs of local women picking the reefs around the island and we were not convinced that there would be much to see on a snorkel trip.

Most of the kiosks on the beach selling formal snorkeling trips also rented equipment for DIYers like us, but we were still surprised when the proprietor that we rented from pointed directly out in front of our hotel and said “Just go out there.”

Fortunately, we were wrong about the reefs being picked bare. They were loaded with fish. It was honestly one of the best snorkeling experiences that I have ever had. What a wonderful surprise!

After a few days in Nungwi, we began backtracking, quite literally (Stonetown –> Dar es Salaam –> Mombasa –> Kilimanjaro Airport –> Nairobi) because of the puddle-jumper plane that we flew on, back to Nairobi and finally back home.

We saved for what seemed like forever to go to Africa thinking that it would be a once in a lifetime experience. Now, several months removed from the experience, I can’t wait to go on safari again. It is just a matter of when.