I mentioned a while back that my CSA had been giving me more tomatoes than I knew what to do with. This might not be so bad if Chris ate tomatoes, but he isn’t a big fan of them which resulted in a massive tomato-eating burden for me.

I know. You’re heartbroken for me.

If you remember, part of the deal when I signed up for the CSA was that no piece of produce would go to waste. That meant that I, a tomato lover, ate so many of them this summer that I don’t care to see a tomato again until next summer. Ok, that is a bit of an exaggeration, but enough already.

Naturally, what did I get at my last CSA pickup of the year? That’s right nine super ripe tomatoes.

In desperation I Googled ‘frozen tomatoes’.

Could it be? You can freeze tomatoes to use later? Like in the winter when the grocery store is selling colorless, hard as a rock tomatoes? Sure can! Granted, they can’t be used as ‘fresh’ tomatoes again, but they are still great for soups, sauces, and any other ‘cooked’ tomato application. 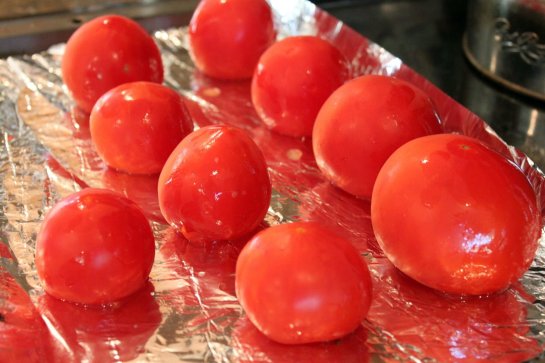